Comic strips are a regular newspaper feature in many countries, including Japan: three- or four-frame miniatures conveying gags, glimpses of everyday life or comments on the world, running the whole gamut of human experience, from political satire to sweet sentimentality. They form a vital strand of manga history, but they’re also very much part of current manga. Indeed, many Japanese never read any other manga than the yonkoma – comic strips – in their daily newspaper.

Yon is Japanese for four, but yonkoma can have more or fewer panels. They run vertically rather than across the page, reflecting the order of Japanese text. Some tell a single gag or mini-story, others are serials. Foreigners are most likely to see them in established long-form manga, to tell gags at the end of chapters or story arcs or provide a little extra fun for the fans.

Some Western favourites originated as yonkoma, including Kiyohiko Azuma’s Azumanga Daioh, Ume Aoki’s Hidamari Sketch, Kakifly’s K-ON!, and Hidekaz Himaruya’s Axis Powers Hetalia. Yet there are a host of more successful newspaper and magazine strips in the Japanese domestic market, most of which attract little or no attention in the West unless a major  event like a creator’s death or big-number anniversary catches the attention of the blogerati.

When Masashi Ueda’s Kobo-chan hit its 10,000th strip on 14 June  2010, Ueda marked the event by giving his boy hero a new baby sister. Despite having headlined the strip since its 1982 debut in the Daily Yomiuri, being syndicated in other papers across Japan and having over 60 collected volumes and a 63-episode NTV animated series to his credit, Kobo-chan remains unchanged. After 28 years of success he’s still just a kindergarten pupil, living with his parents Koji and Sanae Tabata and his maternal grandparents in an ordinary suburb. That’s the secret of his success:  an innocent everyman reflecting the joys and troubles of everyday life and a nostalgia for simpler times, when several generations lived together and kids still played in the street.

Machiko Hasegawa’s Sazae-san is another long-running success. Starting in 1946 in a local newspaper on Hasegawa’s native Kyushu, it gained such popularity that its creator and her heroine moved to Tokyo and national syndication in 1949. Working for one of the Yomiuri‘s rival papers, the Daily Asahi, Hasegawa continued to produce new strips reflecting the changes in modern Japan, and an increasing nostalgia for the past, until she chose to retire in 1974 after around 10,000 strips, collected into 45 volumes. Sazae-san also became the star of her own animated series. 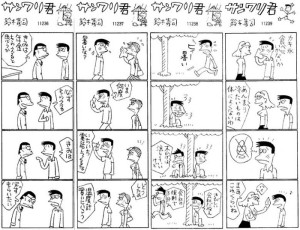 Despite 28-year runs, Kobo-chan and Sazae-san are more than 1,200 strips short of the Daily Yomiuri‘s longest-running yonkoma. Sanwari-Kun, whose everyman protagonist is “only 30% reliable”, ran for a grand total of 11,240 instalments from June 1966 until its creator, the late Yoshiji Suzuki, was hospitalised in May 2004. He passed away in July of the same year, aged 75, after producing his strip for 38 years. But Sazae-san‘s anime series has broken longevity records in a newer medium. Airing since 1969, with around 6,500 episodes so far, it’s the longest-running TV cartoon series on the planet and still attracts big family audiences in Japan.

Nostalgia for the remembered safety and freedom of childhood, or the certainties and customs of an earlier era, is a common trait in short comics worldwide. Strips like Kobo-chan and Sazae-san offer an alternative to the headlong rush for progress and poke gentle fun at the changes in our lives and our reactions to them. They might seem dated to 21st-century city dwellers, but they play well with readers in rural areas or less developed countries, where the ever-faster traffic of the media superhighway is still only a distant rumble.

In mountainous rural Japan, access to broadband and mobile phone connections is not always straightforward, and the Internet is less integral to many lives than the local paper. Catching up with events, unwinding after a long day, or browsing on Sunday morning, millions of Japanese experience manga through bite-size strips in the national dailies, or syndicated to local titles. In other Asian countries –  Malaysia, for example – geography and economics combine to make broadband access rare outside the major cities, but Kobo-chan and many other Japanese comics are widely syndicated in local papers.

Of course, not all yonkoma are steeped in nostalgia – and it’s interesting to reflect that Sazae-san itself was considered almost dangerously radical when it first appeared in the upheaval of the postwar Occupation. The format has adapted well to new media and new ideas. Like Sazae-san,  other yonkoma have been animated. Azumanga Daioh and Axis Powers Hetalia were long predated on TV by Anmitsu-hime and Shonen Ashibe.

Nowadays, some yonkoma appear exclusively online. But their simplicity and widespread availability on paper have an enduring appeal for those with no interest in reading off a screen. The most popular newspaper yonkoma are still collected into pricier, more durable volumes, and for those who prefer laughs to news, monthly magazines such as Manga Club are composed largely or entirely of yonkoma. The short comic strip is a long-running success with people who never read any other kind of comic, in Japan and worldwide.