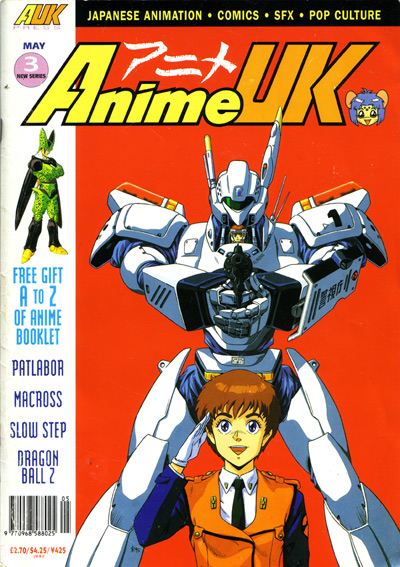 I’ve written articles, features and reviews for magazines from travel mag Islands to Comics Journal. I still do occasional reviews and features for print magazines and online. But the first three magazines I was involved with were Anime UK/Anime FX, Manga Mania/Manga Max and Super Play. I loved working on them, and they predate the Internet boom so their history isn’t widely known. I’d like to tell you a little about them.

Anime UK was the first British professional magazine devoted to Japanese pop culture.  Its twin inspirations were the first American semi-professional anime magazine Anime-zine, and the Japanese magazines that Steve and I drooled over, and occasionally bought at outrageously marked up prices, in a long-vanished Japanese book and stationery store called Books Nippon next to Saint Paul’s Cathedral. We wanted to make something that had the visual impact of  the Japanese magazines, the accessible yet authoritative writing of Anime-zine and the energy of Britain’s newborn anime fandom.

Anime UK (AUK to its friends) started out in the spring of 1990, as a fan newsletter written by Steve and I, pasted up from typescript and photocopies on our dining-room table. We spent most of that year high on Cow Gum, the layout artist’s everyday intoxicant in the pre-computer era. One of our first subscribers, Wil Overton, worked for a graphics company called Sigma with offices in London’s Mortimer Street. He showed AUK to his boss, Peter Goll, who decided he liked the look of anime and manga and offered us the chance to turn it into a professional magazine. We moved into his eyrie, up four flights of stairs in a tall, narrow, unheated building, and published our first issue in 1991. We had five fabulous years, but after a change of name and publisher, Anime FX closed down unexpectedly in 1996.

Peter was a great designer and typesetter, trained in the craft tradition of metal presses, but he’d never published a magazine before. As I’d never edited one, and Wil and Steve had never designed one, we were all coming from the same place. Despite, or maybe because of, our inexperience, we created something remarkable. We provided a platform for new talent, published some intriguing writing and art, and helped to nurture Britain’s emerging anime and manga fandom and the brief golden age of the independent British anime label.

Jonathan Clements and I dedicated The Anime Encyclopedia to Peter. He’s unknown in British anime fandom today. Yet without him it wouldn’t have got off the ground, establishing a profile that had national newspapers like The Guardian knocking on our door for information, and visitors from all over the world climbing those steep stairs. Peter will never be forgotten by those of us who knew him – or indeed by anyone unfortunate enough to be walking down Mortimer Street when something went wrong on the computer. At such times, the offending mouse or keyboard would nosedive through the window, accompanied by some very colourful and completely unedited language. We just ducked, and gave thanks that he never threw the monitor.

Alongside working on AUK, quite a few of the team also worked for Super Play, a British SNES (Super Nintendo Game System) magazine edited by Matt Bielby for Future Publishing. (The Swedish game magazine Super Play is unrelated.) Wil Overton designed the magazine, and I wrote a regular column and reviews. Super Play helped to raise the profile of Japanese entertainment in Britain, but sadly it folded shortly before AUK did, in September 1996. Matt became the publisher of DEATH RAY, one of the magazines I’ve reviewed for, also now defunct. Daniel Spencer kindly gave me these scans of an article from the August 1993 issue, issue 10, including a cute Wil Overton chibi portrait of me.

When AUK folded, I edited Manga Mania for about eighteen months. The magazine was set up by Dark Horse Comics in 1993 to win British readers for their manga catalogue,  but by 1996 Titan Publishing owned it and were trying to decide on the right direction for it. After I resigned, they re-launched the magazine as Manga Max, with Jonathan Clements as editor, and I continued to write for it. It finally folded in 2000.

Anime UK was distributed in the UK, USA and parts of Europe, and even sold regularly in a handful of shops in Japan. It is remembered fondly by 90s fans, and just as it was inspired by earlier zines, it continues to inspire retro efforts in the internet age: it was cited by new-millenium blog Colony Drop as a key influence on the design and art in its 2011 print fanzine.