“a treasure trove of knowledge … the only concise volume … to provide a snapshot of the past 150 years of  this sequential art form. Lavishly illustrated and stuffed with facts, figures and anecdotes on key manga and the creators behind them”     Kory Cerjak, The Fandom Post

“A Brief History of Manga is an excellent guidebook to almost all major events, people and genres…Fitting the entire history of manga into less than one hundred pages is practically impossible, but McCarthy has managed the huge task of including and excluding with flying colors.”  Veli Holopainen, Futoi Yatsu

“It is with such wonderful details that McCarthy’s bullet-point history of the form really triumphs, and while the abundance of colour illustrations would be better served by a larger page size, given the price, one can’t really complain.” Jasper Sharp, Manga UK blog 30/10/2014

The Great East Japan earthquake of 2011 triggered many fundraising efforts around the world, including a pechakucha event in London – a group of fascinating presentations on the impact of Japan on different art forms, creators and cultures. I contributed a short history of manga, which provided the seed for this book.

Commissioned by Tim Pilcher, edited by Nick Jones and designed by Simon Goggin, this tiny volume – not much bigger than a postcard and lighter than many a sandwich – won’t tell you everything about the history of manga; but it will give you a short, simple overview of the astonishing story of this medium of magic, and how it ties into world culture.

Manga has never been toffee-nosed and isolationist; it’s always been a rowdy, greedy, noisy magpie artform, hunting for treasure in every nook and cranny and creating, reversioning or stealing whatever will make it better able to express itself. No shame in that – it’s the journey of every artist from the Lascaux caves to the White Cube, every writer from Homer’s forebears to the next hot ticket and beyond. An accessible medium powerful enough to deal with the great truths that engage all art, democratic enough to include everyone and anarchic enough to offend many, manga is a dream ticket for the scholar and researcher. First and foremost, though, it’s great entertainment.

I think this book has something to offer most comics fans, but its real target is the reader with no allegiance to manga. A stealth missile painted in lollipop colours, it’s after those interested enough to wonder what all the fuss is about, those looking for a stocking filler or inexpensive gift, and those who want to pick up a few arcane facts for the next pub quiz. It wants to take their money this one time, yes, but it also wants to start them down the slippery slope to fullblown manga and comics fandom.

You have been warned. 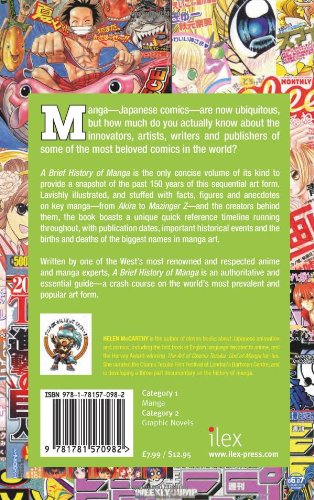 BUY ON AMAZON US

One thought on “A Brief History Of Manga”