After puppet yonkoma, here are some more of the the puppets we made at Gateshead Central Library during Anime Attacks 5. (Faces have been removed to protect everyone’s privacy.)

In this post I’m focussing on stick puppets. The puppet yonkoma elements were mounted on plastic drinking straws; these puppets are mounted on wooden lolly sticks. Like all the materials we used, these are available cheaply in pound shops or through craft suppliers, or they can be saved and recycled (although you’ll have to eat a lot of lollies to equal the 50-for-£1 bargain I got.)

First, a cute paper creature complete with its own title frame and an elegantly sinister black felt cat with glued-on eyes and tiny red mouth. These were drawn and decorated as flat cut-out shapes and glued or sellotaped to the lolly sticks. It’s quick and simple to make lots of these so you can easily make up lots of characters. If you wanted to make  a large group – a line of soldiers or dancers, a flock of birds or a herd of sheep – their sticks could be attached to a single longer stick so you could move the whole line at once.

This armoured knight with a horned helmet has been drawn and cut out, then mounted on two lolly sticks fixed together in a cross shape. You can do this with glue, sellotape or string. If you’re using him in a fight scene, his outstretched arms won’t bend because the lolly stick supports them. (His sword, shield and helmet horns might tear, though, so maybe you’d want to glue him onto stiff cardboard.)

These wonderfully colourful creatures were made by our youngest workshopper. That lovely rainbow tail is glued together from leftover felt offcuts: very little is wasted when you’re crafting!

This puppet is a hybrid using a three-dimensional foam ball for a head and a flat body mounted below it on the lolly stick. It was carefully planned and drawn in segments so that it could be put together with moveable joints, but the paper fasteners we had were too big for the delicate pieces so it was taped together as a flat figure. The 3D head gives it extra charm!

This flat felt Pikachu has a very cheeky feature – his tongue is made of a red plastic straw. If the puppeteer holds the lolly stick in one hand and the end of the straw in the other, Pikachu can stick his tongue out at you and jump up and down (or run away) at the same time. The features are drawn onto the felt using felt-tip pens. Felt is very absorbent and water-based paint just soaks into it, but felt-tips or gel pens will usually give you a good result.

Lastly, another hybrid puppet using lolly sticks and a paper fastener to create a monstrous moving claw. Inspired by a magazine cover, the maker traced the shape and then cut the pattern in two, extending the smaller part so that there was a tab to attach behind the main claw to make it open and close. The pattern was cut out in yellow felt, which was then coloured with a red felt-tip pen to give a subtle orangey variation of colour. A paper fastener holds the claw together and two lolly sticks make it open and close to munch its way through all opposition. This puppet needs two hands to operate it, but it moves really well. (Notice the shadow behind the paper fastener – the felt had to be stiffened so that the fastener didn’t stretch and tear it. You can do this with sellotape, with glue allowed to dry thickly, or with a piece of card used like a washer.) 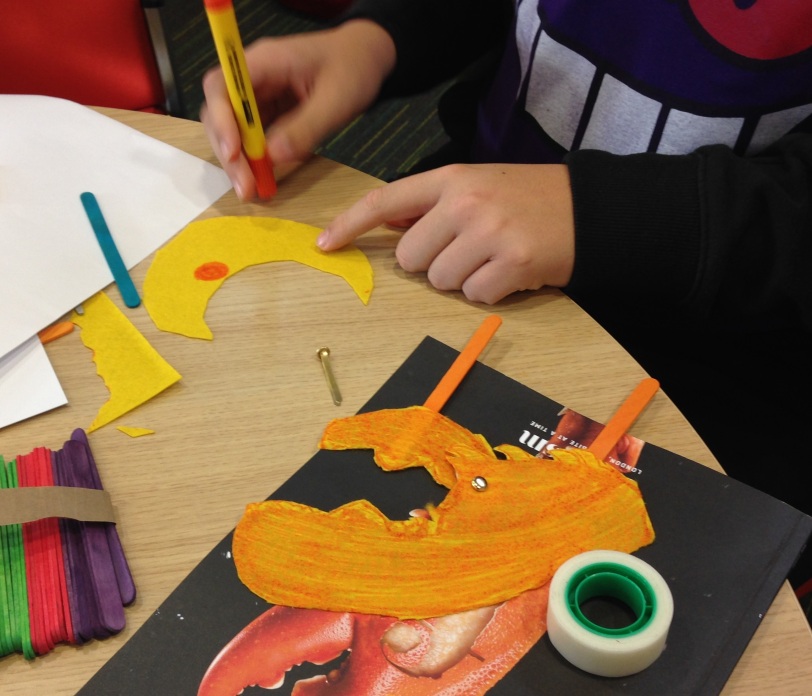 I love these puppets – they’re simple, inventive and full or personality. Later I’ll show you more puppets using foam balls, some made with plastic cups, and some using the Victorian technique of paper fasteners to join moving limbs.

You can put on striking performances with these basic creations. Imagine staging the carol “The Twelve Days of Christmas” with each line done as a cut-out mounted on a lolly stick. You could cut the images out of magazines if you didn’t want to draw them, and the multiples, from two turtle doves and three French hens right up to eleven pipers piping and twelve drummers drumming, could be mounted on a single long stick or strip of thick cardboard so that one or two people could give the whole show alone. There’s a whole lollystick puppet staging of Pink Floyd’s “The Wall” just waiting to happen. Start crafting and let your imagination run wild.