Cover to US edition

“… as full and lively a rendering as we are ever apt to get, or want. The style is bright, the scholarship is precise and the patience – to have sat through all those hours of puerility – is most impressive.”

“a must for all anime fans”

“…possibly the best critical views and reviews I have read of any movies, whatever the type”

“…represents a maturing trend in Western writing about anime, giving the medium respect through giving it perspective and identity from the inside rather merely than pasting it with labels from the outside.”

Research for this book proved that Sturgeon’s Revelation* applies equally to pornography in any medium.

Having worked with Jonathan Clements on Anime UK and Manga Max, I asked him to write the book with me. It was a good decision. Our different views made for a more balanced book, our writing styles meshed well, and we both had a strong sense of the ridiculous, an essential tool for writing about pornography. 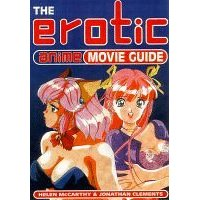 We would almost certainly take a different approach to the topic today. The title listings at the end of the book have been superseded by the more comprehensive Anime Encyclopedia, so we could devote more space to the early history of anime erotica, and its links with other pornography. I would also be very tempted to devote more space to the importance of transmission devices. Broadband transmission has sent private downloading of all kinds of media into hyperdrive, and tracking the impact of the rapid development of the mobile handheld device on the porn market is a project worthy of someone’s attention. The moe genre, replete with accidental overlaps and deliberate flirtations with child pornography, is another fascinating topic.

Critically, the book was well received. I was surprised to get my first notice from the great Japanese scholar Donald Richie, evidence of the interest that ‘serious’ culture on both sides of the world was just beginning to take in the incursions of anime and manga into Western consciousness. It was reviewed in a wide range of publications, and most reviewers paid us the compliment of reading the book before deciding what to say.

The mindset that labelled all things Oriental as either cheap or deviant is less prevalent than once it was, and there is wide understanding of the role of erotica in popular culture. Yet hysteria is still generated around cartoons and assumptions still made about their possible intentions and effects. Western fans have been hauled into Court and labelled paedophiles because they like Japanese comics. Japanese legislation has been and will be reviewed. It seems that sex in cartoons will stay controversial for some time to come.

US EDITION ON AMAZON UK

* “90% of everything is crud.” Proclaimed by Theodore Sturgeon in 1951, in relation to science fiction writing, and recorded in the March 1958 issue of Venture Science Fiction.

You may know this as Sturgeon’s Law, and until I looked it up I would have agreed with you, but Sturgeon said otherwise, and I fully support an author’s right to his preferred terminology.  For reasons unknown, many sources substitute the word “crap” for “crud”.

Sturgeon’s Law is different, though equally true: “Nothing is ever absolutely so.”