How To Draw Manga Made Easy at A-Kon 26

The charity auction at A-Kon 26 was absolutely amazing. It’s one of my favourite jobs every year: two hours of shameless begging, bullying and pleading combined with ham-fisted stand-up with an enthusiastic audience to raise money for charity. This year, the charity was Texas Scottish Rite Hospital for Children and the response of the A-Kon crowd was as generous as ever. Still waiting for the numbers but I think we did well. 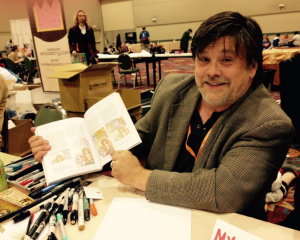 Bruce Lewis finds himself in the pages of How To Draw Manga Made Easy.

There were 80 lots – quite a bit to get through in 2 hours. If we’d taken every item donated by the dealers and supporters at A-Kon as a separate lot, the auction would have been an all-day event and I’d have no voice left now. But, as is customary, gifts were aggregated into larger lots where appropriate. A couple of us donated a clutch of Doctor Who items which were bundled into two terrific packages and did rather nicely. (The Easter egg inside the Kinnerton cardboard Dalek from Australia probably shattered in transit, but the chocolate is edible till March 2016 and the Dalek itself looks so cool!) There are exceptions – Darren Ashmore’s donation of a stunning heirloom Galaxy Express 999 watch with the box signed by Leiji Matsumoto himself was the star soloist – but mostly lots contain a selection of tempting stuff.

The watch (silver version) and its box 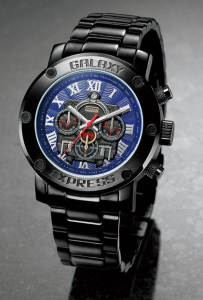 I had two books in the auction, both donated by my publishers – a copy of the third print edition of The Anime Encyclopedia from Stone Bridge Press and How To Draw Manga Made Easy from Flame Tree Publishing. Two of my auction team also threw in copies of a Tezuka art portfolio – which was lovely, because then I could give one to the losing bidder after a duel that raised a stonking $220 for our charity.

Two of the artists on How To Draw Manga Made Easy were at A-Kon 26. Our schedules were so crazy that I didn’t manage to catch up with artist and voice actor Kristen McGuire while I had a copy of the book to hand, but Bruce Lewis is pictured flicking through a copy at his Artists’ Alley table on Sunday. (You might like to take a peek at his webpage because there’ll be a prize draw going on there soon!) And Dallas educator Rebecca Hairston took a copy back to her class to inspire and engage them.

Dallas educator Rebecca Hairston uses all kinds of media to engage her students.

S-Con in Scunthorpe, Anime Central in Chicago, Anime North in Toronto and A-Kon in Dallas: that makes four conventions at which I’ve been able to share copies of How To Draw Manga Made Easy with fans, charities and good causes, as well as highlighting the amazing work of the artists in image-packed presentations. Flame Tree Publishing have generously provided the copies, the conventions have kindly given me a platform, and I’ve been able to show audiences how anyone can develop their innate creativity in their own style. Win-win!