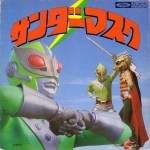 Thunder Mask live! The theme to the TV show

Monsters galore in this fabulous book

A shitajiki, or writing board, slipped under a page to prevent marks on the sheets below.

The evil alien Decandar have designs on Earth. When high school boy Koichi Inochi’s girlfriend Mayumi is possessed, he’s helpless to save her or the human race – until he too is possessed by a heroic alien life force known as Thundar, enabling him to transform into superhero Thunder Mask. Thunder Mask is more than a match for the Decandar invasion, but Koichi is tragically aware that saving Earth from aliens may mean condemning the innocent girl he loves to death.

Osamu Tezuka’s 1972 manga Thunder Mask was planned for TV from the beginning. In fact, it arrived on Japanese TV screens a week before the manga began publication, in a tokusatsu production – live action with lots of special effects – aired on NTV. The company that made the show, Hiromi Pro, was founded by former members of Tezuka’s own studio, which had recently folded. (Jonathan Clements and Motoko Tamamura have some interesting things to say about it in their indispensable book, The Dorama Encyclopedia.)

In 1972 Tezuka published 20 new manga, including Buddha and Ayako, as well as continuing some of his successes from earlier years – a total of almost 40 manga series and one-shots. Thunder Mask shows his willingness to follow successful trends and his magpie tendency – the giant alien superhero possessing a human to fight aliens and monsters tips a very large hat to Ultraman, who had been saving the world from invasion by aliens and their monster cohorts since 1966. The doomed romance is also a strong plot element in a number of Ultra stories, though usually focused on adults rather than teenagers.

Such a relentless output, maintained alongside the collapse of his studio and one of the darkest periods of his professional life, made some recycling and borrowing of material inevitable, and Tezuka was certainly not alone in the industry in revamping story elements from his own earlier work and that of others. What matters to a reader or viewer is not where the story idea originated but what the writer and crew have done with them. Thunder Mask ran for 26 episodes, with its own merchandise and fan following. It may be a minor part of the Tezuka canon, but it’s an interesting one.