A stunning Atom toy from Takara 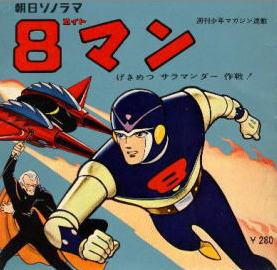 Yes, Astro Boy turns 50 today – that is, unless we consider his “official” birthday to be the date in June 1963 on which he first appeared as Astro Boy in the US version of the anime series. But in any event, this is his 50th birthday year, his golden anniversary.

It’s also, in a sense, the golden anniversary of anime onTV.

As many people (myself included) have pointed out, Tezuka’s groundbreaking series wasn’t the first domestic animation on Japanese TV. That was an anthology show called Three Tales (3-tsu no hanashi) screened in January 1960. But it was the game-changer, the show that made Japanese children want to race home and switch on the TV every week, the show that convinced other artists and other studios to dive into the uncharted seas of making animation on a shoestring and hoping that merchandise and subsidiary rights would be enough of a lifebelt. By the end of the year, even the mighty Toei, home of top-quality movie animation and previously disdainful of the TV market, had joined the race.

What a year it was for anime! Six more TV series followed Tetsuwan Atom/Astro Boy.  Tezuka’s puppet animation Ginga Shonentai (Galaxy Boy Troop) hit the screen in April. Made in collaboration with the Takeda Puppet Troupe, only one complete episode of 92 is known to survive. Sennin Buraku (Hermit Village,) also screened in April, was aimed at adult fans of Ko Kojima’s still-running gag manga. More robot adventures for children appeared in October when Mitsuteru Yokoyama’s mighty Tetsujin 28-go (Gigantor) shook the screens. Kazumasa Hirai and Jiro Kuwata’s  Eightman followed in November, with a new take on the idea of the cyborg which would eventually influence Hollywood movies like Robocop. Later that month Toei’s first anime TV series, Okami Shonen Ken (Wolf Boy Ken) seasoned Edgar Rice Burroughs with a dash of Rudyard Kipling, offering an action-packed alternative to robots and cyborgs. Before the year ended, hit manga Ciscorn Oji (Prince Ciscorn) by Fujiko Fujio (A) brought the American West to Japan’s livingrooms through the animated adventures of a perky young Native American hero and his cute friends.

The influence of the manga market was obvious. A series based on a popular comic was more likely to attract audience share and therefore advertising and sponsorship. The other great asset of a regular TV slot, its function as a half-hour advertisement for spinoff merchandise, was also fully exploited. Hit manga were already merchandised heavily and there was no reason for anime to ignore such a clearly signposted goldmine.

Another interesting and often overlooked fact is that late night anime for adult viewers was firmly established as part of the anime mix. Most anime was made for juvenile or family audiences, then as now, because that’s where more money is spent on toys and spinoff goods; but a clear awareness that animation can appeal to all age groups is on record in 1963’s TV schedules.

Theatrical animation also had a good year, with three major movies, all from Toei: Wanpaku Oji no Orochi Taiji (Little Prince Fights The Eight Headed Dragon,) Wanwan Chushingura (WoofWoof 47 Ronin,) and the first of eight theatrical features revamped from the Okami Shonen Ken series, which appeared on 21st December with the others following throughout 1964 and into 1965. This set a lucrative and tempting precedent for future rights-holders with a popular TV franchise to exploit, and others have followed Toei’s lead, all the way up to Hideaki Anno with his constant revamps of Evangelion.

Fifty years ago today, anime lit a joyously inventive and absurdly underfunded rocket under the small screens of Japan. That’s cause for celebration, official birthday or not.