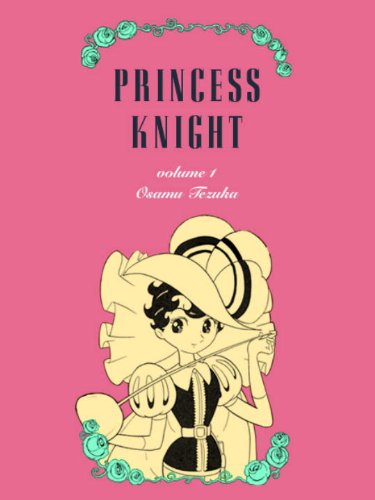 Yesterday I recorded a podcast for a future edition of Manga Out Loud, with Ed Sizemore and Frederik L. Schodt. The topic: Princess Knight, the English-language version of Osamu Tezuka’s revolutionary manga Ribon no Kishi, first published in 1953, and due out soon from Vertical in two volumes.

Princess Knight is, in my opinion, the most influential shojo manga ever published. It wasn’t the first Japanese comic for girls,  nor Tezuka’s first comic with a female readership. But by considering all the influences and experiences of his own life from a feminine perspective, Tezuka managed to take girls’ manga in a completely new direction. He created a long-form story which was just as complex, exciting and involving as any boy’s adventure tale, yet completely focussed on a girl’s quest for her true self.

Tezuka had experienced rejection and persecution for being himself when he was bullied at school. His loving and affluent childhood had been followed by the hardships and losses of war. Through the eyes of his mother, his sister and his friends, he had seen what it was like to  face the monotony and danger of everyday life in wartime and then emerge into a new world where everything they knew, even the definition of how to be a woman, was changing.

He also understood their yearning for glamour and fun. So he packed his story with the theatrical flourishes of his beloved Takarazuka musical theatre troupe, with sumptuous backgrounds and costumes influenced by European film and  literature, with fairytale touches of sheer beauty. At the heart of it – not in a supporting role on the sidelines, but front and centre – he placed a girl with a heart of marshmallow wrapped around a core of steel, and he sent her on a journey to discover how strength and selfhood are not gender-determined. No wonder other manga-makers have been mining the vein he uncovered ever since, and no wonder female readers are drawn like addicts to Japan’s cross-dressing, blade-flashing heroines.

Talking to Ed is always fun and instructive, and Fred wears his huge expertise and scholarship so lightly that every time I meet him, I only realise later how much I’ve learned. As someone who knew and worked with Tezuka, Fred brings an extra dimension to any discussion of his work. Fred’s writing was my inspiration when I began to write about anime and manga, and was one of my key influences on both The Anime Encyclopedia and The Art of Osamu Tezuka: God of Manga. if you’re at all interested in comics, or Japan, his seminal works Manga! Manga! The World of Japanese Comics and The Astro Boy Essays should be on your shelf.

We had a really enjoyable discussion about the style, the influences and the roots of Princess Knight. You can hear us here.

(Vertical is also releasing Tezuka’s The Book of Human Insects, aka Human Metamorphosis. So that’s Christmas gift-buying sorted for your sister, your niece, your musical-loving great-aunt and your edgy postmodern feminist friend. A sumptuous two-volume hardback edition of Message to Adolf/ Adolf ni Tsugu will follow, but sadly not until 2012, so you’ll need to think of something else for Dad.)