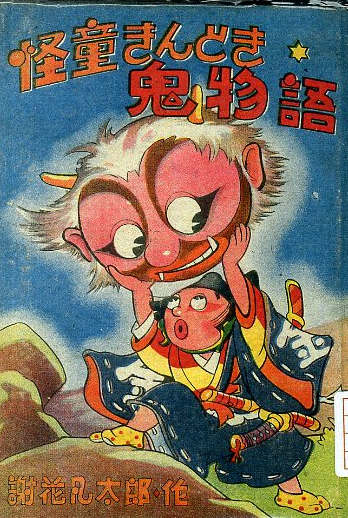 Strictly speaking, Bontaro Shaka isn’t unknown in English. He’s mentioned in Yoshihiro Tatsumi’s A Drifting Life, the manga autobiography available in translation from Drawn & Quarterly. His influence on the young Osamu Tezuka is also highlighted in Tezuka’s manga biography, which has been translated into French and Italian, though not, alas, into English. But, as with other mangaka I’ve highlighted under this title, there is, as far as I can discover, very little solid information available about him outside Japan.

Despite being a favourite with the children of prewar and wartime Japan, and despite continuing to create manga into the 1960s, he shared the fate of many wartime mangaka, almost vanishing into obscurity. There were, I think, three main reasons for this disappearance. Manga were not widely preserved then, with war, natural disaster and day-to-day life taking its toll. The idea of manga as a significant part of children’s literature, let alone popular culture, didn’t take hold until long after Shaka’s death, in 1963. The warmly rounded, childlike line of his art was one of the conventions that the gekiga generation rejected as irrelevant to contemporary comics. All this worked against Shaka’s memory: but he had some powerful advocates.

Osamu Tezuka wrote and spoke of his admiration for Shaka, and his amazement that his work was almost forgotten.  Comics historian Isao Shimizu talked about Shaka’s work in his 1989 book Manga Shonen Comics and the Birth of Postwar Manga, and in his Timeline History of Japanese Comics in 2007. Shaka was featured in 1993’s Shonen Manga Best Collection anthology, and in Kunio Hase’s 1994 Dictionary of Japanese Cartoonists from Data House.

His work also features in the Gordon W. Prange Collection at the University of Maryland. Although the Prange Collection covers a relatively short period, from 1945 to 1949, it is a treasure trove of Japanese publishing during the Allied Occupation, the most comprehensive holding of books, magazines and newspapers for that era. With eleven of Shaka’s individual works in its catalogue, plus copies of manga magazines, the Collection offers a unique opportunity to study a slice of his life in comics at one of the most interesting periods of manga history.

Shaka was born in 1891 in Nihonbashi, Tokyo. On graduating from Keio University, he became a salaryman and later set up his own company. He adopted his pen-name and began making manga relatively late in life, aged 40. Nakamura published his debut volume Bikkuri Toshin Tai (Surprise Attack Corps) in 1933. Mahou no Akira-chan (Magical Akira) followed in 1934, and from then on Shaka kept up a steady flow of stories. After the war, he also taught writing.

Most of Shaka’s early work was done for the successful Nakamura Manga Library series. He was one of the most popular creators in the Nakamura stable, with 28 titles in the line from 1933 to 1943, so his influence on the children of the Showa era was considerable. His Nakamura works were around 100 to 160 pages long – enough to give young comics fans a satisfying read. Osamu Tezuka, who would become Shaka’s most famous fan, was five years old when Bikkurin Toshi Tai appeared. Tezuka’s father, a salaryman like Shaka, was also a comics fan. He bought the latest Nakamura releases on his daily commute between the family home in Takarazuka and his office in Osaka, bringing them home for little Osamu and his brother and sister to read.

Shaka’s career kept going after the war. He could and did produce shorter works and serials, telling a satisfying story in as few as 12 pages, or ending an episode on a cliffhanger to ensure the reader would buy the next issue. Sora Tobu Kaibutsu (Sky-flying Monster)  Kashin Bou Koji, Futonno Kai (The Wonderful Futon) and Mahou no Tsue (Magic Walking-Stick)  appeared in Manga Shonen magazine, published by Gakudosha from 1947 to 1955.

It’s interesting to note that Shaka was adapting classics of Japanese literature (or in the case of Koizumi, Irish-Greek-Japanese literature, since this was the Japanese name adopted by Lafcadio Hearn.) He also produced manga versions of episodes from Japanese history, providing easy-to-read versions of classic literature and legend, in an effort to broaden young minds without frightening them off altogether. His ability to put together a lively, action-packed story with humour and suspense meant that his fans would read material they might have shunned without Shaka’s name on the cover, and perhaps go on to read the historical or literary originals later. What Shaka was doing for Showa children, the Manga Shakespeare series is still attempting today.

It was also part of a wider movement across the arts. A number of Showa illustrators firmly believed that art for children should hold the same depth and value as art for adults. Studying Shaka’s work, one can see in his lines and panel layouts a sophisticated spatial awareness and a refined grasp of pacing which the young Tezuka was quick to emulate.

Two of these titles have been reprinted recently. Manga Chuushingura, a great favourite of Tezuka’s recounting stories from Japanese history, was reprinted by Nakamura in 2005. Kaibutsu Taiji no Yuushi Iriya (Heroic Ilya’s Mysterious Battles) was written by Tarou Asahi, a pen name for the highly regarded poet Hideo Oguma, who died in 1940, with art by Shaka. It retold the story of a Russian folk hero, which was given another new lease of life in 1985, in Ilya Murometsu, a novel by SF writer Yasutaka Tsutsui, and was also reprinted in 2005 in a two-volume collection of comics based on Oguma’s works, published by Sofusha.

This renewed interest in Shaka in his home country will hopefully encourage manga-lovers outside Japan to get to know him and his works better. With the Prange Collection titles available for study at the University of Maryland, you have only to call and make an appointment to make his acquaintance.