Waving the flag for Canadian conventions

It is, you know. It’s the second largest country on the planet, as the brilliant Anime North opening video by iammatthewian pointed out. And it’s a really nice place.

I’d never been to Canada before I was invited to Anime North 2011 to receive their annual Momiji Award. The convention has been running since 1997, but the Momiji Awards were first presented in 2001. The first award went to veteran producer Fred Ladd. He was followed by a string of luminaries: Takayuki Matsutani, CEO of Tezuka Studios, comic artists Frank Miller and Go Nagai, animator/director Hayao Miyazaki, writer/producer Carl Macek, voice actors Peter Fernandez and Corinne Orr, and publisher Claude Pelletier. I was honoured to be in such company.

Canada’s national emblem is the maple leaf.  Momiji (紅葉) is the common name for the Japanese maple tree, whose leave turn red in autumn. It’s also the name of the convention’s mascot, who appears in many incarnations by various artists on items from convention books and badges to t-shirts. 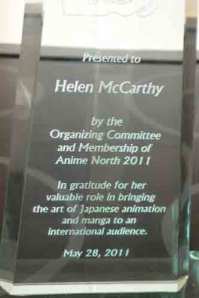 The award is presented for spreading awareness of Japanese animation and manga to an international audience. I was touched to read the citation on the beautiful, and heavy, shard of crystal that came home in my hand baggage.

A man with taste as well as style!

It wasn’t the only thing I brought home, either. I was constantly given things – a doll for my collection, a goodie bag stuffed with Canadian treats (low on dried mooseflesh, high on maple syrup,) a rather spiffy hooded top that should be more than equal to British winters, a lovely mug with my name on it. Someone who asked me to sign a copy of Anime UK magazine gave me a beautiful keyring. Everyone gave me a warm welcome and a smile.

Canadians sometimes say “it takes two seconds” – to be welcoming, kind, polite, respectful. They certainly practice what they preach. The convention was pushing 20,000 attendees, but despite the crowds and the lines, everything – including the Masquerade – started and finished pretty much on time, and everyone stayed pretty cheerful and good-natured throughout.  In four decades of congoing, I’ve known convention masquerades start so late the judges were ready to slit their wrists to have an excuse to leave the room, and sat through opening ceremonies that dragged on until every restaurant in the area was closed, but Anime North ran like a well oiled machine. I’m sure there were panics and last-minute hitches behind the scenes, but that’s where they stayed.

The programme was packed with goodies. Guests included two Japanese and seven Western voice actors, one Japanese and one Western producer, two Japanese bands, two great costumers, writers, artists, a local comedy improv troupe, a TV host, a sculptor, a swordmaster, a taiko group, game designers, wrestlers and a circus performer. (And absolutely no lumberjacks.) The con programme is the first place I’ve ever seen an anime con guest described as “200lbs of crustacean sensation”. (That was Bastian Snow of Inter Species Wrestling.) 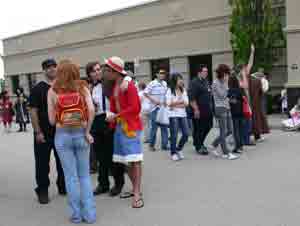 As ever, the problem was balancing time, space and presence. There were too many good things to see and do and not enough of me to see and do them all. Not even the presence of a surprising number of Time Lords could solve this particular equation. (I counted nine, though I’m sure there were more – five Eleventh Doctors, three Tenth and one Fourth, complete with a very good scarf. You should be able to spot two of them in the picture on the left.)

I enjoyed my own talks, though they had their Tardis moments – seeing David Row, stalwart of pre-Internet anime conventions here in the UK, in the front row on Saturday made me wonder if I’d dreamed the last fifteen years and suddenly woken up in Birmingham. Jan Howard Finder took me back to my SF-congoing days in the 1970s and 80s. I signed copies of Anime UK  magazine alongside my books on Hayao Miyazaki, manga characters and Manga Cross-Stitch.

I also signed quite a few copies of The Art of Osamu Tezuka: God of Manga at the vast caravanserai of The Beguiling, one of Canada’s best-known comic shops. Chatting to the staff and customers I got a sense of Canada’s comics culture as rich, diverse and growing. Maybe having two native languages makes it easier for Canadians to absorb manga and anime into their own mix rather than viewing anything in a foreign script as somehow unreal, but they certainly don’t seem to feel that local comics are being threatened by Japanese imports. The artists’ alley (almost as vast as the football-pitch-plus dealers’ room,) and the number of webcomics being bought in printed form by eager fans, indicate that there’s plenty of room in the market for anyone with talent.

Great cosplay is so common at Anime North that nobody bats an eyelid.

Costuming was serious business at Anime North. Husband and wife team Dana & Bruce MacDermott were the Costume Guests of Honour, and the programme on offer was amazing – everything from technical skills to presentation. There were separate Lolita and doll programmes, writing panels, a yaoi programme in its own hotel, a whole slew of serious-but-fun science items including a robot building and operating contest. And of course, there was anime. It seems strange in this era of downloads and iPads that anyone should actually watch anime at a convention, with so much else going on, but the act of watching something together, of shared experience, has a certain seductive charm. Besides, how could anyone bear to miss Anime Hell?

A convention on this scale takes up quite a bit of space. Anime North used four hotels plus the Toronto Congress Center. There was a political conference on the same weekend, also in the Congress Center, but the two events didn’t really mix. A few bright-eyed but bemused-looking twentysomethings in smart suits wandered along the pathways eyeing up the throngs of cosplayers like exhibits in a rather downmarket zoo. I got the feeling that political Canada isn’t quite ready for its voters to dress up as game avatars or Pokémon. (Nor are they alone in this. Imagine the British Labour Party Conference transported to London’s Excel Centre on MCM Expo weekend. What kind of soundbite would Ed Miliband’s people cook up for him, I wonder?) 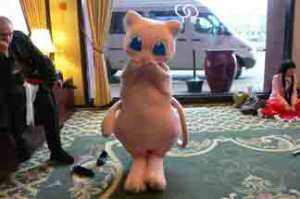 Never mind the fur, which way does it vote?

Anime North is pushing the 20,000 attendee mark, and facing a problem. Getting enough hotel beds around a conference centre with a range of food choices and prices for that many people is a problem, even in a major city. The options are, essentially, to cap numbers or to change the nature of the convention itself, to become more like the commercial events, the MCM Expos and Dragoncons, where a corporate profit-motivated entity takes over. That needn’t mean a bad convention experience but it does mean a different one.

I wouldn’t want Anime North to be any different than it is. I had a wonderful time with old friends, made new ones, saw talent galore on display and regretted not having more hours in the day on every day of the convention. It was a fantastic experience.

And they gave me an award. Did I mention that? Canadians have superb taste.