Since my recent post about Ippei Okamoto, I’ve been making notes on his life and work. He was a prolific painter and cartoonist, and despite the destruction of the Great Kanto Earthquake in 1923 and the Second World War, a substantial amount of his work survives.

I thought it might be interesting and useful to post the titles and dates of his works here, with the current location of any known originals, in the hope that others may be able to add to the list. He was an important artist and writer in manga and in the wider culture of prewar Japan, so collecting information on his work seems very worthwhile.

The list is divided into comics and published works, films, original art, and books about Okamoto.  Where I know of a surviving example, I’ll give its location or a weblink, but please be aware that some links to commercial galleries may break when an item is sold.

There is also a short bibliography on Okamoto. I’d appreciate it if anyone who knows of works relating to him could add them via comments.

The Taro Okamoto Museum of Art holds material on Taro’s early life and parents, including many editions of Ippei’s and Kanoko’s books. 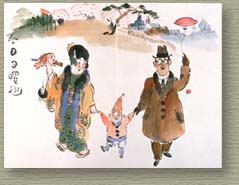 Aside from writing his own comics, Okamoto kept up a flow of satirical and critical cartooning for his day job. This cartoon was published in November in Asahi Shimbun. The Tokyo Mangakai was founded this year.

Asahi Shimbun series of cartoons based on characters from Natsume Soseki’s novels.

Hito no Issho (Human Life),  serialised from May in the Sunday evening edition of Asahi Shimbun.

Illustrations to Jun Ishiwara’s translation of Albert Einstein’s notes and addresses from his Japanese lecture tour, published by Kaizosha.

Regular Bungei Shunju contributions continued for the next 2 years.

1929 Manga Sugoroku (Manga board game), lithograph given as a supplement to Shufu no Tomo (Housewife’s Friend) magazine, a game board illustrating the life choices of modern young women.

Illustrated interview with the National High School Baseball Championship competitors at the Koshien Stadium for Asahi Shimbun. (His son Taro accompanied him to this interview and remarked that the newly enlarged main stand “looked like the Alps”. This made its way into Ippei’s interview and illustrations, giving the stand its popular title.)

1930-31 Shin Mizu ya Sora: I couldn’t trace a date or publisher for this work but Sharon Domier came to the rescue. It was printed in 2 volumes, one with theatrical cartoons and comments, the other political. Pub: Tokyo, Senshinsha, [1930-31], it was also included in Ippei’s collected works.   Lambiek.net records it as “widely admired”.

1933 Interviewed Morihei Ueshiba, founder of aikido, for the November issue of Budo magazine.

1940s Ippei wrote half a dozen popular songs, including Neighbourhood Community Association. (According to a 2006 note by Takashi Hattori,a relative of one of his composers, Okamoto was staying in an inn in Gifu in 1947 when he drew his last cartoon.)

1920 Tokaido gojusantsugi manga emaki (The fifty-three stages of the Tokaido in cartoons), Tokyo Mangakai. Modelled after Ando Hiroshige’s famous series of 55 prints, the two scrolls contain hand-drawn humorous versions of his famous views by members of the Tokyo Manga Association, including Okamoto. A copy is held in the British Library, Or. 15028 in the Handlist of Japanese Manuscripts Acquired Since 1984.

1922 Autograph portrait of Albert Einstein, dated December, Sendagi. Done in ink at the back of a copy of Ando Hiroshige’s Fifty-Three Stations on the Tokaido (Jimbutsu Tokaido,) published by Muraichi in 1852, possibly owned by Einstein, now in Princeton University Library.

1942 (circa) Seisen hissho taisei koyo manga (Cartoons on the Victorious Sacred War), album of humorous watercolour sketches on World War II and the Japanese political situation, prepared as part of an exhibition by members of the New Japan Cartoonists Association (Shin Nihon Mangakai) with contributions by Okamoto and other members of the Association. 14 of 15 sheets remain in the volume in the British Library, no. Or.15514 in theHandlist of Japanese Manuscripts Acquired Since 1984.

In 2009, Saru Gallery offered a scroll painting with poem by Ippei done in sumi ink and colours, showing a drunk leading his horse, dated “sometime in the 1930s”. The asking price was €1,200. The subject crops up again in one of the Nagaragawa gallery items listed below.

In 2009, Gifu’s Gallery Nagaragawa held a selling exhibition of over 200 works by “local pioneers” including four Nihonga brush and ink works by Okamoto (nos 197-200). Prices ranged from ¥45,000 to ¥ 95,000. The images on the website are small, but show Okamoto’s free brushwork and strong sense of humour.

The International Institute for Children’s Literature, Osaka, held an exhibition, Artists Who Were Involved With Children’s Books, from July to September 2000 featuring works by Okamoto, his pupils and peers.

The Tanakaya Gallery in Paris mentions Ippei as a “recognised painter” in a biographical note on his classmate Shunsen Natori.

12 thoughts on “Ippei Okamoto: Notes Towards a List of Works”