The Art of Osamu Tezuka, God of Manga: Hasshin! Henshin! 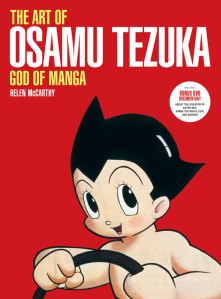 Yesterday, after ten days of nail-biting tension and anxiety, I received an advance copy of my new book.

It left Ilex’s offices in Lewes by first class mail on 13 August. Alas, only in black and white movies does the Royal Mail still guarantee next-day delivery for first class mail. A combination of increasingly sloppy service and a series of short strikes over pay and conditions have wreaked havoc on London’s mail deliveries all summer long. Add to this a series of allegations that, after each strike, backlogs are so large that some mail is simply binned, and you’ll probably understand my anxiety. The fact that I haven’t killed a single postman this week, not to mention still having any fingernails left, virtually qualifies me for beatification. though I doubt any Buddhist would agree that a person who’s been sitting by the letterbox every morning for ten days can claim freedom from worldly attachments. There were moments when I wondered if I’d dreamed the whole thing and was about to wake up and find my other half in the shower and the book just another figment of my dream-created past. But now it’s here: Elvis is alive, and is she ever beautiful!

The transformation of a book from manuscript to object is a metamorphosis that never fails to astonish me. A book about Osamu Tezuka, who understood metamorphosis as a scientific and a philosophical process and used it in so many of his works, was always going to be an interesting metamorphic subject. He’s perceived in so many different ways from so many different angles in Japan, and yet here in the English-speaking world few people look beyond his TV animation.

Luckily, the design and editorial team for my book were among the few. They’ve arranged my words and the images I chose into a thing of beauty, and even given me a few surprises. I knew what the cover looked like, but I didn’t expect Astro Boy’s head and shoulders to be a thick die-cut applied to the cover, giving it a chunky, three-dimensional feel. I didn’t expect the gorgeous, subtly retro end-papers. I wasn’t expecting the PVC slipcover that protects the die-cut front and the DVD insert on the back, but also adds to the whole 50s-futuristic sci-fi feel of the book. The DVD, a previously untranslated Japanese documentary on Tezuka, gives the book an extra dimension.

I knew how big it was going to be, but a set of dimensions couldn’t prepare me for something the size of a tea-tray sliding out of the package. Then there was that fabulous new-book smell, fresh cut paper and ink and dreams given form, that never fails to thrill. Until I actually hold it in my hands, a new book of mine is like a friend I’ve never met – I know it intimately, but at a distance. The first physical encounter smashes that distance. The dream metamorphoses into weighty, full-colour 3D reality.

Of course, I’m not the first to see the book. Authors rarely are. The bulk shipment won’t arrive for several weeks, and the official publication date is still some way ahead, but advance review copies have started to go out to publications with long lead times. (One of my displacement activites while waiting for the book to arrive has been haunting the Book Exchange in Notting Hill Gate, where some London reviewers unload the advance copies they don’t want to keep. Thankfully The Art of Osamu Tezuka hasn’t shown up there yet…) The distributors’ sales forces have display copies.  Here in the UK there’s an ace publicist working with the Ilex team, and in the USA the Abrams promotional sentai is racing into action. As in all the best action-adventure stories, the intention is that the excitement of the launch sequence builds on the thrill of the transformation scene, hopefully leading up to a headline-grabbing, rave-review-generating, merchandise-shifting climax.

Just like a movie or TV series, just like any corporate enterprise, the book was truly, wholly, exclusively mine only in the embryonic stage. From the moment I signed the contract and started to shape it to the needs of the industry and its readers, it began to transform. The process of shaping it from the dozen or more books it might have been into the book it finally became, of morphing it from idea to object, was accomplished through the hard work of many talented individuals. It’s a tribute to the many facets of their talents, as well as to the multi-talented artist it celebrates.

One of them, design stylist Jonathan Raimes, sadly passed away while working on the book, like Tezuka himself taken from his work and family unexpectedly and too soon.

The team at Tezuka Production was incredibly supportive, confirming dates and facts, providing images and information. It was a pleasure to work with them. A company charged with the legacy of a genius has to walk a fine line between preserving its integrity and enabling its interpretation. Their clarity of purpose, combined with a sincere respect for my independence and integrity, was both reassuring and humbling.

To have a foreword from Katsuhiro Otomo is a great privilege. Tezuka fan Otomo was a protege of Rintaro, one of Tezuka’s assistants, so his words provide a link with Tezuka himself, as well as giving a unique insight into Japanese perceptions of Tezuka.

The Great Britain Sasakawa Foundation and the Authors’ Foundation supported my work on the book: without this support I couldn’t have finished it in time for publication during the 20th anniversary year of Tezuka’s death. I owe them many thanks.

There are so many other people I should thank for their part in transforming the idea for this book into reality. My translator and researcher Dr. Darren-Jon Ashmore, and my beta readers Walter Amos, Jonathan Clements, Tim Eldred, Robert Fenelon, Steve Kyte, Dr. Natsu Onoda Power and Ada Palmer, were unfailingly generous with their time and expertise. Dr. Takeshi Tanikawa and Dr. Kenji Ito allowed me to use their research: Dr. Tanikawa was especially helpful in reviewing and commenting on my use of his work. Friends and friends of friends chipped in with photos, reminiscences, comments and thoughts. Our common passion for Tezuka’s work triggered an outpouring of enthusiasm and generosity that made the metamorphosis of idea into object possible.

I’d also like to thank the two writers who are responsible, not just for this book, but for the English-speaking world’s present awareness of Tezuka. Both were personal friends of Tezuka – his “two Freds” – and the book is dedicated to them: Frederik L. Schodt and Fred Patten. Without their work, mine would not have happened. I could write my own tribute to Osamu Tezuka, and get it published, because they created an awareness of Japanese comics and animation in the US that enabled the English language anime and manga industries.

So while you’re ordering my book, you should also order some of theirs.

3 thoughts on “The Art of Osamu Tezuka, God of Manga: Hasshin! Henshin!”