Some months before I started this blog, Frederik L. Schodt was honoured by the Japanese government with the Order of the Rising Sun, Gold Rays with Rosette. This is a late, but heartfelt, word of congratulation and admiration. Schodt is the founding father of manga studies in English.  Without him, the current success of Japanese pop culture in the West might not have happened. 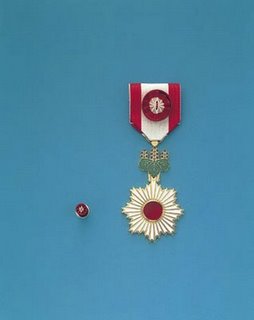 Order of the Rising Sun, Gold Rays with Rosette

The citation described him as a writer, translator and interpreter, and referred to his contribution to “introduction and promotion of Japanese contemporary popular culture in the United States of America.”

He began to translate manga in the 1970s, before most people were even aware of Japan’s popular  culture, when the image of Japan overseas was either cheap electronics or quaint kimonoed people drinking tea under the cherry blossom. While most of us were still waking up to the idea that comics in our own language could have more than entertainment value, Frederik Schodt was knocking on Osamu Tezuka’s office door with his friend Jared Cook, asking if they could translate Tezuka’s epic manga Hi no Tori into English. He went on to translate works by Riyoko Ikeda, Leiji Matsumoto, Masamune Shirow, Yukinobu Hoshino and Naoki Urasawa.

He also realised that most comic readers, lacking his own knowledge of Japan beyond the language, needed a historical and cultural context to help them understand how and why Japan’s astonishing comic culture had developed. In 1983, Kodansha published his book Manga! Manga! The World of Japanese Comics. It quickly became a seminal text for the new field of manga studies, and it remains one of the most useful books in any manga student’s bibliography. Right from the beginning, Schodt’s writing had an easy, natural grace and exemplary clarity that set the standard for other writers on popular culture, myself included.

With 7 books for Kodansha and Stone Bridge Press, and over 200 articles to his credit, plus a long list of translations, he has become a resource for Western media, scholars and museums, frequently consulted by all kinds of organisations. He is also the interpreter of choice for big-name companies and individuals when they visit Japan or meet the Japanese. He was Osamu Tezuka’s translator and assistant on many of his US visits, and the two became lifelong friends.

This award could not have gone to a more deserving man.